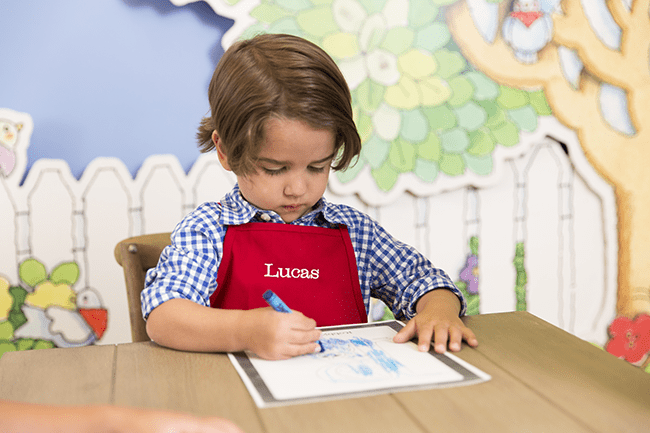 It’s no secret that developing self-control is one of the most important skills a child can learn in his or her lifetime. Teaching your child self-control helps them to plan, work through difficult situations, cope better with emotions, and live a happier and healthier life.
Kids with poor self-control and planning abilities are more likely to have aggressive behavior problems (Raaijmakers et al 2008; Ellis et al 2009). They are also more likely to experience anxiety and depression (Martel et al 2007; Eisenberg et al 2010). Over the long term, impulsive kids are more likely to become obese, more likely to smoke, and more likely to become dependent on alcohol or drugs (Sutin et al 2011; Moffit et al 2011). A subsequent study of young children in four countries– China, South Korea, Taiwan and the United States—reports that kids with stronger self-regulation skills had bigger vocabularies and better test scores in mathematics and early literacy skills. Learn more about this and other research and parentingscience.com.
While it was commonly believe that people were born with varying degrees of self-discipline, scientists and psychologists have since discovered that self-control can be both learned and practiced.
What are the best ways to teach a child self-control?

Create an environment of trust

It stands to reason that a child will have limited self control if he or she doesn’t believe that adults keep their promises.
Gwen Dewar, Ph.D. of Parenting Science describes it perfectly as she discusses the issue in her article about self control in children. She notes:

You may have heard of the famous “marshmallow test.” Preschoolers were given the choice between eating one treat now or two treats later, and the kids who demonstrated the greatest capacity to wait ended up, in subsequent years, with better outcomes. They performed better on scholastic achievement tests, were more likely to finish college, and less likely to develop substance abuse problems.

But when Celeste Kidd revisited this research, she wondered how much depended on a child’s expectations. If experience has taught you that adults don’t keep their promises, or that institutions don’t enforce the fair allocations of rewards, why should you wait patiently for a hypothetical prize?

Kidd tested her idea in this landmark experiment, and the results bore her out. It only took a couple of disappointments to undermine children’s willingness to delay gratification (Kidd et al 2011).

Subsequent studies confirm that our willingness to wait depends on how we weigh the risks and benefits. Adults opt for immediate gratification when they have reason to distrust the person promising to deliver a future prize (Michaelson et al 2013). And even two-year-olds have resisted the temptation of cookie – when the rewards for waiting were sufficiently high (Steelandt et al 2012). You can read more about these studies here. See more at: http://www.parentingscience.com/teaching-self-control.html

Find a way to make it fun

Children will practice self control more naturally when they learn to find something positive in difficult situations (after all, a spoonful of sugar helps the medicine go down). By teaching your child how to find something pleasurable in difficult situations, you’re giving them a mindset that will help them persevere through challenges.
You can help enforce this mindset by doing things like turning cleaning into a game, having a special study party with treats, letting your child help you cook if they’re impatient for dinner, etc.

Praise hard work instead of intelligence

When you praise your child for hard work instead of saying things like “you’re so smart,” you’re helping them develop self-discipline. If a child believes he or she is succeeding only because they are smart, they’ll believe that things worth doing will come easily to them, which means they’ll get quickly frustrated if something becomes challenging.
If you are specific in praising hard work, you’re helping them to develop a mindset of delayed gratification (working through something difficult to achieve a later reward).

Help your child regulate his or her emotions by helping them work through them. Try your best not to ignore your child’s reaction or give in to the tantrum. If you can instead take the opportunity to help your child define their emotion, acknowledge the emotion, let them know it’s okay to have those emotions, and then talk through the problem, you’re teaching your child self-control.
Sometimes it can be easier to try to teach a child to obey you simply because you’re a parent. However, this doesn’t teach your child self-control. If you help a child find why they should behave a certain way instead of expecting them to behave “just because,” they’ll be better equipped to deal with conflict in the future.

Enrolling your child in sports or in lessons to play a musical instrument helps your child practice self-discipline. Not only does it teach them important skills like teamwork, math, and reading skill; it also helps them work hard toward a later result. Remember to keep it fun and praise their hard work instead of only praising their achievements.

Routine is a form of discipline that makes good habits easier to maintain. Teaching your child how to set and follow routines (even when it’s difficult) prepares them to do so in the future. Setting a morning routine and a bedtime routine not only teaches them good habits, it also helps their mind practice self-control on a daily basis.